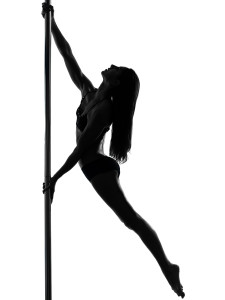 “Oh, man, we’ve got to go. Asian strippers are supposed to be sick. Do you get to pick your girl,” he asked his coworker. “I mean, if they send one over and you don’t like her, can you send her away and say ‘no, I want someone else’?”

I perked up. I’m an eavesdropper by nature (a trait ingrained in many reporters) and believe if you don’t want your conversation to become public consumption then you should not have that conversation when out and about.

“Um, uh, I don’t really know,” he said, busying himself behind the counter, not looking at his friend. “I’ve only been once.”

Or, I suspected, not at all. How can you go from raving about these “specialty” strip clubs to not being sure what happens there? (SN: I did not realize there were ethnicity-specific strip houses, but rather thought all women — regardless of race/ethnicity — danced at the same clubs).

“A was going to kill B,” she said into her phone, holding the device a good foot away from her mouth. “I mean actually kill B. This wasn’t a threat. It could happen.”

The stripping conversation ceased, and the three of us looked at the woman talking on speaker, then at each other.

She continued, swearing into the phone, discussing the situation with the person on the other end. Her voice was loud, and her jaw tight. They debated what A could do to provoke B, and vice versa.

She looked at us, seemingly irritated that we were (clearly) hearing her conversation. I stared back, then looked away.

I never look away, but this broad scared me.

When it comes to people, I am not a wimp by nature. In fact, my husband says I can be trusting to a fault. For years he warned that trait was going to get me in trouble.

He was right, it did. I’ve had more than one situation where I let readers/listeners feel too deep a sense of familiarity — or interest — enough so the police were involved.

A conversation with law enforcement brings perspective, and reality.

But I’m not fully reformed, and internalized everything I wanted to say to this woman.

The old Kristi would’ve asked if everything was OK. If she’d like me to call the police, or someone else. I may have even given her my card. Someone (maybe several someones) was clearly in trouble.

But I’ve gotten more cautious, and skeptical. I know many people aren’t good, and some people are plain crazy. I also know it’s not my job to risk my life, or my family’s, to help others. I am not a firefighter.

But I am human. And, while we all need to watch out for No. 1, we should be aware of others, and notice if they’re in a bad situation.

I glanced at her, still frightened. Something about her presence, her look, her appearance — and the conversation — made me uneasy. I got a tight feeling in my chest — something that could only be described as fight or flight.

I wanted to get out of there.

The staffer finished my order and passed it over the counter with a word of warning.

“That shit right there is messssssed uppppp,” he said. “I’d stay away from her. Or, at least, keep on eye on her. Watch your back.”

“There’s a lot of crazy conversations going on at the deli today,” I said, thanking him and taking my order.

“Hey, it’s (insert store name/location),” he said. “You never know what you’re going to get when you leave the house to come here.”

4 thoughts on “Overheard: Asian strippers, and a death threat”