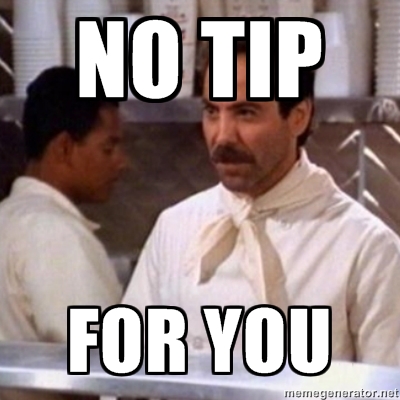 Many, many moons ago I’d get my hair cut at a small place in a strip mall in my hometown. The only two stylists at this joint were the owners — let’s call them Polly and Beatrice.

I’d get my hair cut by Beatrice, for $10. This was the perfect price for a college student in 1999. And, since she was the owner (AKA not paying booth rental fees or turning her earnings over to a salon head), I did not tip.

Suddenly, I’d come home from break and she’d never have availability. This was odd seeing as I would previously get in the same day. I tried a few more times, with the same results. END_OF_DOCUMENT_TOKEN_TO_BE_REPLACED

Originally, a portion of the restaurant’s address and the diner’s signature was visible. I have removed those details.

I got involved in an interesting conversation on Facebook this morning regarding tips. A waiter posted a photo of a receipt where he received $6.54 on an $85.46 bill with the caption “This is not okay people.”

I agree. That’s a lousy tip. And, knowing this particular individual casually, I suspect he’s not one to offer service that warranted a less-than-10-percent gratuity. What perplexed me, though, was how some of the commenters (conversation below) jumped to comment on the financial situation of the diner(s).

Tips are not guaranteed. They are earned. Lousy tips happen for all sorts of reasons — people didn’t like what they chose/ordered or they thought the service out of the kitchen was too slow (both of which aren’t the waitstaff’s fault, but that doesn’t mean some diners won’t blame them). It could be as simple as a personality clash. Perhaps a waiter or waitress reminds the person picking up the tab of someone they don’t like, personally or professionally. Maybe it was matter of a bad day. END_OF_DOCUMENT_TOKEN_TO_BE_REPLACED 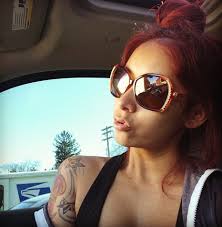 During her “Jersey Shore” days, Nicole “Snooki” Polizzi made headlines for drunken debauchery. Today, the mom of one-almost-two has people talking again. This time, for using an expectant mom parking spot at Babies ‘R Us.

Snooki is pregnant, but she’s not pregnant “enough,” according to detractors who got all badooglafied after the former reality star posted a photo of herself on Instagram pulling into the special spot.

They argue she plasters the media  — social and traditional — with talk of her healthy lifestyle, and shares photos of herself lifting tires like she’s a member of CrossFit. That, they say, means she doesn’t “need” a special space. END_OF_DOCUMENT_TOKEN_TO_BE_REPLACED