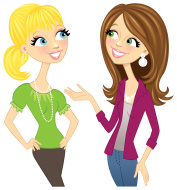 Years ago, my parents took us to the Christmas show at Radio City. What I remember more than the falling soldiers routine or live camel on stage was how the group next to us talked the entire time.

For the full two hours they gabbed about everything from Christmas gifts to their drunk uncle to the homeless man who scared them in the Port Authority.

Why, I wondered, would you come to a show to talk? Coffee shops are for that nonsense, or bars.

We said “please stop talking.” The ushers asked them to quiet down. Management got involved. And yet, the conversation continued. Nothing worked.

Their behavior was not only disruptive to all the (paying — those tickets ain’t cheap) theater-goers seated around them, but it was terribly disrespectful to the performers.

I was reminded of this yesterday during family day at the library. The event started with 30 minutes of reading and songs and concluded with crafts, games and entertainment.

We got there before it started, and settled in with C among the other children and parents. Promptly at 10, two librarians greeted everyone and began the program.

They used props and made funny sounds. The children paid attention and the parents watched, smiling and snapping photos.

Well, all the parents except two. Two moms — we’ll call them Hoodie 1 and Hoodie 2 — talked the entire time. This wasn’t the occasional observation or comment, but rather a 30-minute conversation about their lives.

I gave them several looks, complete with a frown and pursed lips (good thing I don’t have Botox). H2 looked back, but they didn’t stop.

The librarian gave them looks, but they continued, arms crossed, talking.

R focused on them, catching H2’s eye, but they were too engrossed in their riveting chat to care (or notice) they were not only disrespecting the children, but the librarians.

I debated asking the women to please be quiet, or to go out in the hall, or another room, but feared this would cause a scene and, as a result, a greater distraction. I also worried “take your conversation outside” could be perceived as “take this outside.”

Fighting terrifies me. Not to mention, it’s tacky and ineffective and sets a far worse example.

On the way home, R asked why I was so surprised by these women.

“Rudeness seems to be the norm these days,” he said. “People are so self-absorbed they can’t notice how their behaviors or actions affect others.”

We also talked about how if no one says anything the cycle doesn’t stand a chance of stopping.

We will try this event again (there’s a similar one later in the month) and, if something similar happens, I’ll speak up — in a calm and quiet voice, at the end, when I’m not interrupting the leaders or the participants.

And I’ll be sure to blog about it, even if I’m in traction.