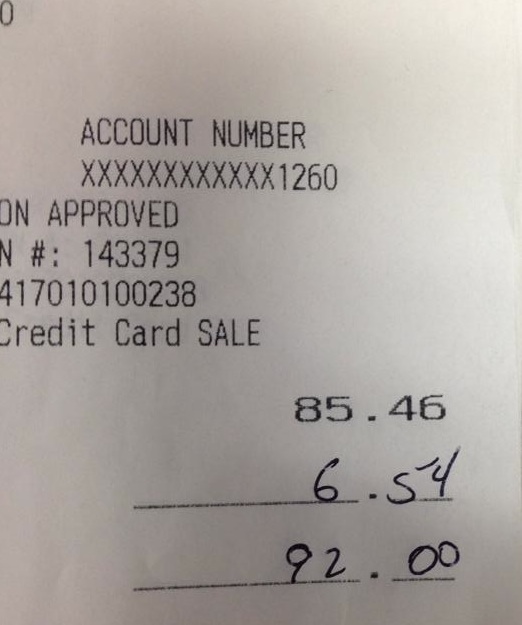 Originally, a portion of the restaurant’s address and the diner’s signature was visible. I have removed those details.

I got involved in an interesting conversation on Facebook this morning regarding tips. A waiter posted a photo of a receipt where he received $6.54 on an $85.46 bill with the caption “This is not okay people.”

I agree. That’s a lousy tip. And, knowing this particular individual casually, I suspect he’s not one to offer service that warranted a less-than-10-percent gratuity. What perplexed me, though, was how some of the commenters (conversation below) jumped to comment on the financial situation of the diner(s).

Tips are not guaranteed. They are earned. Lousy tips happen for all sorts of reasons — people didn’t like what they chose/ordered or they thought the service out of the kitchen was too slow (both of which aren’t the waitstaff’s fault, but that doesn’t mean some diners won’t blame them). It could be as simple as a personality clash. Perhaps a waiter or waitress reminds the person picking up the tab of someone they don’t like, personally or professionally. Maybe it was matter of a bad day.

We leave 20 percent nine out of 10 times (I believe an extra $5 or so when we eat out means less to the diner than it does to a waiter or waitress whose living is based, in large part, on tips). I have left 15 percent when the service was mediocre.

Once, I left less than 15 percent. In fact, it was $1 on a $35 bill. The waiter was horrid — condescending and rude, asking if I could just “eat it as it was” when there was mayo on my sandwich, after I asked for it to be mayonnaise-free, and getting annoyed when I asked if the turkey was deli meat or roasted in-house (I was pregnant and couldn’t eat deli meat). He also brought the drink R ordered when we sat down — as we were finishing up our meal.

As for Ed, I’m guessing he was not an ass, and there was something else going on with the tippers, but to suggest the person or group was not financially capable of dining out is careless, and wrong.

I left my name in there, the first name of the person I addressed and the waiter’s first name so you can distinguish his response (the cash question from one person was an interesting one).