Those signs people hang in their kitchen that say “kitchen,” white, button-down shirts and senior portraits in the yearbook have this in common: they’re boring, and generic. 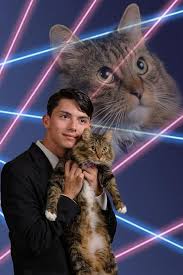 But there are times when we need to accept what is and realize that getting something is better than nothing at all.

The Schenectady High School senior created an online petition so a photo of him with his cat could appear in the portrait section of the yearbook. “This is my photo that should be going into the yearbook, but we know how finicky the school systems can be. I’m hoping that with enough signatures, my school simply can’t turn this down” he wrote on the top of the petition.

Some (including Rodriguez) may call his move preemptive, I call it attention-seeking.

Rodriguez knew that photo — the one with him and Mr. Bigglesworth — could appear in other areas of the yearbook, but that wasn’t enough. No, he wanted to be the stand-out, the show-off, the “look at me aren’t I unique” student in a sea of faux tux and poncho-wearing boys and girls.

Need proof? He boasts on his petition page how he’s gotten so much media attention (SN: this is a great story and totally worthy of reporting on and sharing) and, on what appears to be his Twitter profile, he’s celebrated other past media mentions.

Even if (when) his wonky cat-and-laser pic doesn’t show up in the portrait section of the yearbook, Rodriguez certainly didn’t lose out on this one. The kid wanted viral, he wanted national, he wanted to be seen and he wanted to be known. We — the media and the consumer — have given that to him.

Thing is, if he legitimately wanted to advocate for change, he could’ve worked with the student council, the school and the yearbook committee to allow senior portraits — all of them — to be more individual. Perhaps, even to allow students to submit their own (professionally photographed) photo that fit into a list of guidelines approved by the school (and then approved by a committee).

But, no, he didn’t make this about the group, or about those who come after him. Rodriguez focused on Rodriguez (and, I guess, Mr. Bigglesworth), and no one else.

This is the case of a kid raised in the “look at me” generation of social media. If you’re not getting “liked” and “shared” and “followed” you’re no one to anyone but your cat.

One thought on “Draven Rodriguez, step away from the cat”