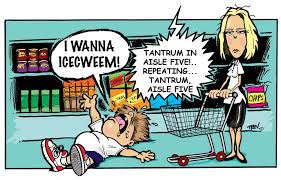 I heard him a good 10 aisles before I saw him. After weaving from the health and beauty section to the vacuum cleaner accessories I met the source of the screams — a towhead of about 3-years-old (maybe a tad younger) slung on his mother’s hip. She balanced the teary-eyed, red-faced youngster while pushing her shopping cart.

He squirmed and she tried uprighting him. My breath quickened, and my chest tightened. I was panicking as if this was my child having a breakdown. I gave the mother what was intended to be a sympathetic look, but what probably came across like fear, or constipation. I walked faster, as if leaving the tantrum in the rearview was somehow going to make it stop.

It didn’t. Of course it didn’t. The child was upset — and howling louder than a needle-fearing 5-year-old on vaccination day.

We arrived at the register at the same time. Her son was now on the floor, dumping the beef jerky displays onto the floor. The mother righted one box, and left the rest. I debated picking up the others (there had to be 40 strips of freeze-dried meat on the floor, at this point), but stepped back, unsure if the mom was going to make the distressed infant — who was now laying on the floor — clean up after himself.

And then I heard a “beep beep” — kind of like the sound one of those hover scooters makes when it’s backing up. But this was no scooter. It was the mother and she was running the wheels of the cart into, and nearly over, her son.

I watched, my mouth agape.

I debated suggesting she stop, then remembered a promise I made to myself when C was born: I said I’d be less judgmental of parenting techniques. Now that doesn’t mean I won’t judge, but I’m (attempting) to judge less harshly.

I don’t know what was going through this woman’s mind, and I’m sure there’s a history there with her sone none of us know about.

I do know C’s just about at the 10 month mark, so we’re not yet at the tantrum stage. And I also know I wouldn’t “pretend” run her over with a cart — in part because everyone around you sees your actions. And, well, I don’t believe roughness and injury is a solution — and I don’t want to end up on the Bad Parents of WalMart website.

But here I sit, several hours later, wondering if minding my business — something I’m not really known for — was right.