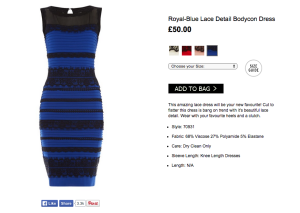 A picture may be worth 1,000 (times 1 million?) shares, but the words that follow are heckofa confusing.

The Internet is going bonkers over this dang dress — a gold and white (although the company does call it royal blue) number originally posted by a 21-year-old singer named Caitlin McNeill.

The performer shot the image on over to her talent manager Sarah Weichel, asking “Is this dress white and gold, or blue and black? Me and my friends can’t agree and we are freaking the fuck out.” (Ouch.)

When I first saw it posted to Facebook last night, I didn’t realize this was a “thing” and thought the woman — a social media connection — doing the asking wanted to know for herself.

Then I scrolled down, and saw every third person in my 5,000-plus connection feed was talking about the dress.

Why, though, have so few noted:

5 thoughts on “10 things you missed about #TheDress”